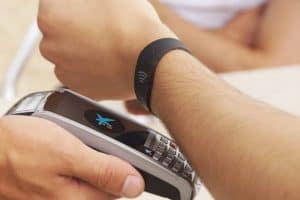 This idea stems from Apple’s ApplePay, which allows users to pay using their phones instead of carrying around a wallet. Xiaomi and Alibaba’s partnership brings the fitness wristband to a whole new level of functionality. With the everyday use of the wristband, we will never have to say “I left my card in my other jacket,” and women never have to worry about fumbling inside their purses.

This product would link to one’s identity, allowing users easy access when paying with the band. The wristband is only allowed to be synced to one device at a time to prevent fraud. If the wearer would like to switch devices, he would have to deactivate the original one from the wristband before selecting a new device.

The most important feature with this wristband is that it doesn’t rely on NFC (Near Field Communication) technology. This means that you can purchase almost anything without regulations. This is the next ‘big” thing in technology, find out about it now before time passes you by!